A New E-Drum Offering From Yamaha

The Yamaha DTX10K-M is the latest and greatest offering from Yamaha’s E-drums department. The DTX10 comes with Real wooden shells which give the DTX10 a striking appearance, 2 distinct finishes help to bring this whole drum kit together, This model is in the stunning Real Wood finish. The Brand New DTX-PROX Module has been designed from the ground up specifically for use with the DTX10. These Brand new Yamaha Drum Kits come with something that Yamaha have never offered before, Mesh Heads! Now you can choose between Yamaha’s acclaimed TCS (Textured Cellular Silicone) Pads or Yamaha’s brand New mesh heads. 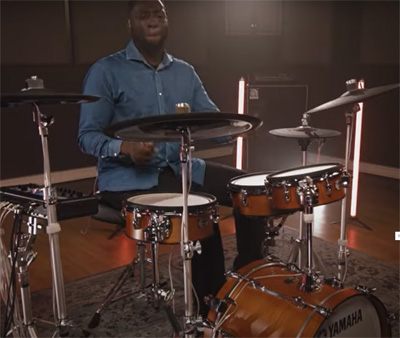 The Brand New DTX-PROX sound module offers totally new sound quality with samples recorded in some of the finest studios in Europe. These sounds can be adjusted and tweaked with a whole host of studio effects so the user can tailor the sound to their exact needs. Users can also upload up to 1000 of their own samples with the addition of the 700+ internal sounds. The DTX-PROX also has 10 outputs suitable for all recording and live situations as well as other features aimed directly at professional level players.

Unique to the DTX-PROX Modules are the Kit Modifier Knobs which allow the user to instantly change the sound of the Kit by adjusting real sampled room Ambience (not just digital Reverb), Kit Compression, and other Effects in real time. Every channel also has EQ, and Transient Adjustment which is usually found in studio software and allows you to change the Attack and Decay of the sound to suit your needs

The Yamaha DTX-PROX is the very first Yamaha Drum Module to have Bluetooth connectivity, this means you can connect it to your smartphone or tablet for audio playback or specialist click apps

The Mode selection Knob on the DTX-PROX allows you to easily move between the different functions of the module without having to dig to deep into menus. You very quickly have access to Kit Select, Click functions, Trigger functions, the Recorder, and Live Set.

The DTX-PROX Drum Module has 2 AUX inputs, one on the back panel (6.35mm) and one on the front panel (3.5mm). All stereo Jacks can be routed to different locations or outputs depending on the module. They can be used by the drummer as a monitor mix output or can be routed to just the headphones

The sounds for the DTX-PROX Module have been recorded in some of the best studios in Europe. Great care has been taken to record each sound from the initial stick impact to the last usable vibration. As well as the direct microphone sounds from the drums and cymbals themselves, the sounds of the instruments in the studios themselves were also captured. There are more sounds present in the Yamaha DTX-PROX Module than in the DTX-PRO, the resolution of the crash, ride and hi hat samples is also higher, meaning there are more dynamic layers allowing for a more natural playing experience

The DTX10 is much faster to trigger than previous DTX models this makes them feel much more natural to play. The DTX-PRO Module also has 256 polyphony, meaning they can play more notes at the same time.

The transient adjustment adjusts the attack and release of the sound, effectively making the instrument sound closer or farther away depending on the settings. Each channel has compression in addition to the compressor modifier. 31 effects can be assigned to each individual channel making each channel a bit different.

The Kit modifier knobs are unique to Yamaha. They allows the user to instantly change the sound by affecting the ambience, compression and effects. You can also see how much each modifiers being used and adjust it in real time.

The effects modifier works by controlling how much you hear the 2 effects processors as well as the master FX. Each pad can send different amounts of signal to either processor meaning each pad can have different effects on it if required.

The Ride Cymbal On the DTX10 have hit point detection or positional sensing, this means it can sense where on the bow it is being played and adjusts the sound being played accordingly, allowing for a more natural playing experience. this is in addition to the 3 zone sensing – Bell, bow, Edge.

You can load up to 1000 of your own samples into the DTX-PRO and PROX Modules. Each sample can be 16 bit or 24 bit, stereo or mono, and is loaded in from a USB drive DTX-PRO = 32Mb (6min 20secs stereo) DTX-PROX= 256Mb (25min 22secs stereo) But this can all be used for drum and percussion sounds as there are other ways to play/ trigger tracks.

Every zone of every pad of the DTX 8 and 10 kits can have 4 layers. Each layer can be an internal sound or a user sample. These sounds can be stacked together or alternated – each time the zone is hit, the next sound in the list is heard. This is a function called Stack/Alt

The DTX-PRO and PROX Modules have a feature called User Voice which works in parallel with Stack/Alt. This means that up to 40 samples can be loaded onto any zone of any pad. These samples can then be set to play at different dynamics. You could load up to 120 samples per pad – 10 layers and 4 repeating samples on each zone.

You can also use the DTX-PROX to record yourself playing. You simply select the Recorder function, press Record, and start playing its as easy as that. You can use the module alone as an audio notepad and record for 90 seconds, or alternatively you can plug in a USB drive and record for 90 minutes. This means by attaching a microphone to the Aux In, rehearsals and lesson can be easily recorded.

If you want to record yourself playing along to a track and you do not have a computer to hand, you can simply use the DTX-PRO or PROX.

If you put the track onto a USB drive and insert it in the module, select the Recorder, find the track, press Play and then immediately Record as well, the module will record your drums over the audio track*. It is a perfect way to record demos.

The DTX-PRO and PROX have borrowed the best practice functions from previous DTX models. There are 10 training functions that are ideal for players of all standards, as well as 37 training songs that allow you to learn various genres. Drummers of all levels should find the training functions a useful aid for daily practice.

The click on the DTX-PROX is exactly what drummers are after – precise, clear, and easily accessible. It can be routed to just the headphone output for use when other musicians are in earshot or can be routed to any of the other outputs for sending to monitors etc – perfect for live use. You can even import your own click samples if there is a click sound you particularly like to use.

It is incredibly important that drummers can hear themselves clearly, so the new DTX modules comes equipped with a high precision, low distortion, low noise, and high- power headphone amplifier. This circuitry delivers high-fidelity sound directly to the player, and has been developed exclusively for electronic drums. The DTX-PROX has both 6.35mm and 3.5mm headphone outputs for ease of use, whether it is headphones or in ear monitors. The DTXPRO has 6.35mm.

Rec’n’Share first became known with the EAD10. Now Rec’n’Share works with the DTX8+ and 10 range, meaning it can be used for practice or video making. Rec’n’Share is iOS and Android compatible. The device connects with a USB cable and an adaptor (depending on the device).

Any track which you have on your device, and which you own a copy of, can be used with Rec’n’Share. Streaming sites such as Spotify and Apple Music cannot be used because of Digital Rights Management (DRM). Rec’n’Share can link to Dropbox for easy access of all your music tracks. Any track in Rec’n’Share can have its tempo changed and have a click added to it. You can also loop sections of the track for better practice sessions.

As well as recording your playing, the Rec’n’Share App can also be used to record drum videos, by using the audio from the DTX-PRO or PROX, and the video capture of the attached device. Videos can be trimmed and edited, mixes changed, and the final result can be easily shared directly from the app.

Every DTX8 and 10 kit comes with a download code to get a copy of Cubase AI, the powerful music production software from Steinberg.

By connecting the DTX-PRO or PROX to your computer with a USB cable, all recording, editing, and mixing tasks that are found in modern music production, can be handled by Cubase

There are no reviews yet.

On all order over

Vivamus arcu felis bibendum
July 30, 2020
Select the fields to be shown. Others will be hidden. Drag and drop to rearrange the order.
Click outside to hide the compare bar
Compare
Wishlist 0
Open wishlist page Continue shopping
X
Feedback
Feedback
How would you rate your experience?
1
Bad!
2
Poor!
3
Fair!
4
Good!
5
Great!
Do you have any additional comment?
Next
Enter your email if you'd like us to contact you regarding with your feedback.
Back
Submit
Thank you for submitting your feedback!